The first thing people ask when they see my collection or when telephone stamps are mentioned is: There were telephone stamps? Followed by: Why did they make stamps for telephones and how were they used? Good questions and ones I pondered for quite some time before starting this endeavor!

When you mention a stamp, most people think of postage and the U.S. Mail but there have been many other uses of stamps such as the taxing of products, registering of vehicles, hunting and fishing licenses, sending telegraph messages, and the list goes on. I use the term stamp as a general term when referring to telephone stamps collectively. These types of stamps have been described and referred to as stamps, passes, franks, and most often message coupons. It could be said that some telephone stamps really aren’t stamps as so many are marked coupon, but are in the physical form of a stamp. The definition of a stamp is a small adhesive piece of paper stuck to something to show that an amount of money has been paid. Here are some examples of gummed telephone stamps that were applied to a form by the New England Telephone and Telegraph Company.

Telephone stamps were most often used for payment of a toll or long-distance charge. They would be used at local telegraph/telephone exchanges and pay stations before they became self-serve coin-operated. They could also be used to pay your bill once the telephone companies started monthly billing. Some were gummed and applied to a form or bill, but most were  just handed off for a call or to pay a bill. They came in booklets of a certain value: $5.00, $10.00, on up to $100.00, usually containing multiple denominations.

As telephone companies were vying for business, many offered their stamp booklets at a discount in an attempt to lock in the customer to using their lines and service, and to pre-sell their phone charges in bulk to big users. Sometimes these booklets were used as perks and given to business associates, contractors, politicians and newspaper publishers to get a little extra press coverage. Companies and even municipalities purchased them in bulk to give to their employees who needed to make calls while out and about, or just to get the discount rate since they were making a lot of toll charges. 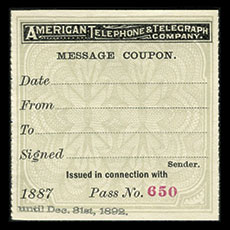 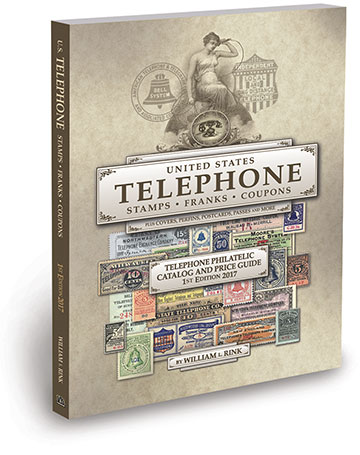 Click here for more information or order a copy!

COMPANIES KNOWN TO HAVE PRODUCED STAMPS BUT AREN’T CONFIRMED: